It was especially difficult to introduce Hinduism to the students of the World Religion class. The many religious traditions of India are intertwined throughout a long and complex history; and maybe we are wrong in our attempt to discern a single religion that we can call Hinduism.

Until the diverse traditions of Indian religion are properly separated by their history, practice, origin or language, we are left with the modern habit of introducing Hinduism as a single, multifaceted religion with dozens of important texts, and practices, spanning over three thousand years.

The trouble with the term ‘Hinduism’ is that it refers to all of the religious traditions born of the Indian sub-continent with the exception of Buddhism, Jainism and Sikhism.

for Hindi Religions as a category, see post ‘Too Many Religions!‘

Popular use of the term ‘Hinduism’ – and the subsequent consolidating of myriad religious traditions into one religion called ‘Hinduism’ – is a very late tendency that began in India’s colonial period.

Indian religion (Hindi religion) starts with a very ancient religion based in the Sanskrit language that scholars and adherents call Vedic religion.

The early Vedic religion informs all religious texts and practices that would come after.

For the sake of clarity, I present the development of Hinduism as a two part history with Vedic traditions followed by Puranic traditions.

There is no single founder, nor known origin of the Hindu Vedic tradition, but its existence is attested in the archaeological record from the second half of the first millennium B.C.E.

The fire-alter is fundamental to Vedic religious practice and is one of the primary concerns of the sacred texts called the Vedas. Like much of ancient religion throughout history, sacrifice (often blood sacrifice) and the fire-altar are at the center of ritual practice in the earliest of Hindu religion.

The Vedic texts include creation stories, ritual practice, and stories of many gods. The gods who dominate the Vedas are Indra, Agni, Varuna and Soma.

The Vedas are four major collections of Sanskrit writings and are considered the oldest of the Hindu sacred texts which influence and inform all sacred texts that came after them.

The Rig Veda is considered the most ancient and consist of over 1000 poems, organized into ten ‘circles’ or ‘mandalas’.

The Brahmanas are writings that come to us as part of the Vedas and represent centuries of commentary on the more ancient poems. These commentaries are mostly concerned with priestly duties and ritual practice.

The Upanishads are writings that also come to us as part of the Vedic corpus and are perhaps the most influential commentary and interpretation on the more ancient poems of the Vedas.

quote from Bṛhadāraṇyaka Upanishad; from the Shatapatha Brahmana; from the Yajur Veda.

The Upanishads contain the core religious concepts of Hinduism as it is understood today. The Hindu concepts of Atman and Brahman are discussed in detail; this concerns the individual’s soul and its relation to the universal Soul.

One reason to refer to the later developing Hinduism as ‘Puranic’, is that much of the practices, rituals and beliefs are well represented in the body of sacred texts called the Puranas.

These texts are concerned with Hinduism’s many gods and their divine stories that explain the god’s relationships to each other and to humanity.

But also the great Hindu epic literature signals the beginning of the Puranic period. The two epic poems are The Mahabharata – which contains the Bhagavad Gita –  and The Ramayana. 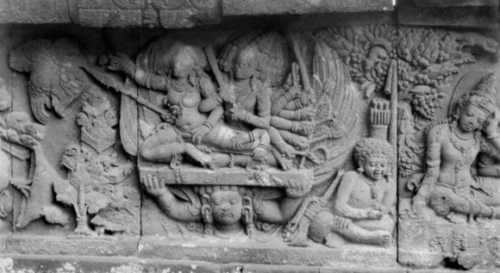 The abduction of Sita from the Ramayana, 900 CE, Prambanan temple in Java,

The blood sacrifice of ancient Vedic Indian religion was gradually replaced with the offering of flowers and foodstuffs such as coconut, coconut milk, fruits, milk and butter.

The individual Hindu may seek to realize their religious beliefs through devotion to the god of their choice, deities associated with their family or family history,  by focusing on the texts that influence them the most, and through the practice of meditation.

Perhaps the best-known aspect of Hinduism is the practice of Yoga. The term ‘yoga’ dates back to Vedic religion and is especially associated with its early definition in the Bhagavad Gita.

In the Bhagavad Gita, which is part of the epic poem The Mahabharata, the god Krishna names true devotion, right worship, right meditation, and right philosophy as ‘Yoga’.

In time ‘yoga’ came to indicate an elaborate system of meditation, and devotion involving body postures, breathing exercises and a demanding process of contemplative meditation.

The Yoga Sutras are texts on yogic practices compiled in 400 CE, in Uttar Pradesh, by Patañjali.

The many schools of Hindi thought come to us as schools of ‘Vedanta’.

Although these are often referred to as ‘philosophical schools’ the teachings are primarily interpretations on the Upanishads and the Hindu concept of the personal soul (Atman) and the universal Soul (Brahman).

Within an in-depth study of Hinduism, a student might explore the subtle distinctions between these schools. But in an introduction to Hinduism, it is enough just to be introduced to the term ‘Vedanta’.

There is no single orthodox version of Hinduism today; and perhaps there is no notion of orthodoxy in Hinduism.

Today, Hinduism is the majority religion in India and Nepal. There are over 900 million adherents including the Hinduism of Indonesia, South East Asia, and in Europe and the Americas.

Often, the followers of Hindi traditions refer to Hinduism as ‘Sanatana Dharma’ or simply as ‘Dharma’, but, as far as I know, there is no insult in calling the religion ‘Hinduism’. Adherents are taught, and believe, that their religion dates back more than 3000 years.

Dozens of devotional sects thrive throughout India, the largest being devotion to Shiva, to Vishnu, to Devi or Shakti the Divine Mother, and to the gods of the Panchayatana tradition.

This last involves a devotion to the five gods: Ganesha, Shiva, Vishnu, Shakti, and Aditya the sun god.

Today the widespread devotion to Shiva, Vishnu or Krishna dominate much of public worship. Individual worship can involve any number of lesser-known gods and practices.

There are over two dozen major festivals in Hinduism and many more regional religious festivals.

There are hundreds of temples and altars still found in India. There are cave temples, forest temples, civic temples and temples on rivers and the coastline.

Like the temples of Mediterranean and Mesopotamian antiquity, the temples of India serve important social, community-building and economic functions, as well as being devotional centers.

Temple at Mamallapuram, including five sanctuaries.

I have had the opportunity to visit temples in the South of India, in the state of Tamil Nadu. Most commonly, the temples there are devoted to the god Shiva, and often, in place of a statue in the familiar form of the god, the temple contains a stone phallic symbol referred to as a ‘lingum’.

Some of these temples devoted to Shiva have sister temples close by, which feature the ‘female’ compliment to the lingum, portrayed in architecture as a water basin or stone pond.

The oldest temples are few in number but possibly date back to the second century.

Even today life-cycle rituals in India may attempt to follow the Vedic rituals which are thousands of years old. Wedding dates can be set according to astrological calendars, dress and decorum may follow ritual practice found in the Vedas. Of course these vary across the Indian subcontinent.

Mundeshwari Temple, Bihar, one of the most ancient Hindu temples in India

The modern Hindu may participate in any or all aspects of devotion, meditation, and Hindu Vedanta. Depending on a person’s background, the devout Hindu today may practice religion quietly and privately, or publicly in any of the many devotional centers, temples, religious schools or communities.

A specialize life-style of asceticism is also found in modern Hinduism, which dates back to very ancient times. A ‘sadhu’ is a holy person who has become a renunciate (one who gives up their worldly life), or ‘sanyasa’, in Hindi.

They live a life devoted entirely to meditation and to achieving the religious goals of direct experience of the nature of their own Atman, and to attaining freedom from Maya (discussed below).

Because the history of India is long and complex, it is useful to memorize a simplified outline of the history of religion in India. This will serve as a context in which you can add knowledge and details as you seek to understand what Hinduism is and has been.

It might not be possible for the student in the introductory courses to memorize, even in part, the vocabulary of Sanskrit terms used in Hindu devotion and practice.

But the exploration into the history and meaning of the following terms (listed below) will enable the student to examine some of the central ideas of all four Hindi Religions, i.e. Hinduism, Buddhism, Jainism and Sikhism.

Your study of Hinduism will soon bring you into contact with the enormous number of Hindu sacred texts.  see post: Two Kinds of Religious Texts

The Vedas are central to Hinduism and are thought to have been committed to writing only 2000 years ago, after a millennium of religious practice and oral transmission.

This is a very large collection of scripture, which traditionally includes the Brahmanas and the Upanishads, and informs the majority of sacred and non-sacred texts that came after.

The Mahabharata is an ancient epic poem of over 3000 pages and contains classical stories that are often isolated as separate texts, such as the better known Bhagavad Gita.

Among other texts of Hinduism are the Puranas, which comprise dozens of texts concerned with specific gods and their cults, the Sutras, which are instructional texts on many different themes, the seven books of the Ramayana, the Laws of Manu, and the vast collection of customs and laws called Dharmashastras.

The adherent of Hinduism sees their religion as the original religion of India, but we must keep in mind that the many beliefs and practices we call Hinduism have coexisted for centuries with Jainism, Buddhism, Zoroastrianism, Islam and Sikhism.